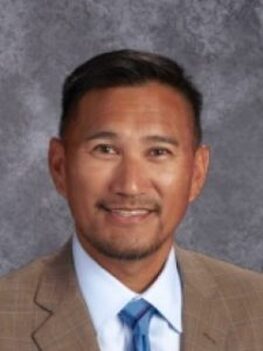 It is with humility that I accept the appointment to be the new principal at Sacred Heart School. I thank Bishop Estevez, Father James Kaniparampil CMI, Deacon Conway, and our school principal interview board. I also extend my gratitude to my predecessors who guided and shaped me as a teacher and now principal.

I promise to uphold the mission of Sacred Heart Catholic School that we all know in our hearts: total development of a lifelong learner who will deal with the world today with compassion and love for service. I aim to continue to help each student develop into the best person God designed the person to be. Their teachers and I will persevere in enhancing our skills to provide excellent, innovative, and relevant Catholic Education. I endeavor to provide the structural technological, financial, personnel infrastructure that will help promote the above objectives.

To this extent, let me thank in advance each family and staff member for your enduring support toward this goal. There might be some challenges, but I believe there will be more wonderful times. It is all worth it for we will all be collaborating in the growth of a beloved child.
​
May God continue to bless us all,
Arsenio Yumul, M.D., M.Ed.
Principal
Sacred Heart Catholic School

Sacred Heart is a parish school of approximately 410 students in grades Pre-Kindergarten through eighth grade. The school site, situated on the corner of 105th Street and Blanding Boulevard on Jacksonville’s Westside, consists of 12.37 acres that include a large parking lot and a fully equipped recreational area. The school is for the Catholic youth of Sacred Heart Parish, but welcomes students of all faiths.

The school was founded in 1960 under the direction of the Irish order of the Sisters of Mercy and had an initial enrollment of 200 students in eight classrooms. These classrooms were located in two portable buildings at the end of the present site. The years from 1960 to 1964 were difficult and trying ones for Sacred Heart due to increased enrollment and the transient population. Since its inception, Sacred Heart Catholic School has accepted students without regard to race or gender.
In September 1964, the first permanent Sacred Heart School building was opened. The new building of modern contemporary design is on the western side of the parking area. This building provided three classrooms, a library, and the school’s administrative offices. In 1966, the second floor of the present two-story building was completed which gave a total of 17 classrooms including the portable buildings. In January 1989, a second building with two stories was constructed for grades K through 4 that replaced the two portable buildings.

The new church was built in 1998, and the original church building is now known as the Family Life Center. In 1998 the gymnasium was completed. The computer lab, science lab and classrooms were added to the secondary school in 2001, as well as an upgrade and expansion of the library, faculty lounge, and administrative spaces. The Little Hearts building, located between the Family Life Center and the secondary school building, was built in 2005 and houses the pre-kindergarten classrooms. The newest building is the Parish Center which was completed in December 2012. This facility contains art and music classrooms and serves as the school lunch room.  In August 2015 SHCS welcomed its first Three Year Old class into the Family Life Center with hopes of continuing the establishment of a Two Year Old program in the years to come.

Since 2008 the school has been staffed entirely by lay personnel. Although the nuns are no longer teaching in the school, there continues to be a strong Catholic presence. The teaching staff is currently 90% Catholic and 10% non-Catholic. The student body is comprised of 87% Catholic and 13% non-Catholic. The catechetical training through the Catechist Certification Program has supported the already rich traditions and symbols of Catholic identity that is evident within the school.
Annual events include the Thanksgiving Feast, Living Stations of the Cross, Catholic School’s Week, Living Rosary, Trunk or Treat, and Play Day. Parents and grandparents are invited to come and share a Thanksgiving meal with their child/grandchild. It is a wonderful event which feeds approximately 1,000 students and families. The feast is sponsored by the Home and School Association. Each year the eighth grade classes participate in the Living Stations of the Cross. In May, the entire school participates in the Living Rosary. With the second grade communion students in the lead, the school processes around the parking lot while reciting the rosary. Each student brings flowers that are placed at the statue of the Blessed Mother. Play Day gives the students an opportunity for classes to participate in friendly competition that incorporates traditional activities with a twist. The day culminates with a faculty/student volleyball game.

In the spring, Sacred Heart Catholic School has their annual Carnival. This is a parish sponsored affair that includes food, fun, and fellowship as money is raised for the school. This themed event takes many hours of preparation and dedication from volunteers of both the parish and the school to help make it a successful occasion that brings together members of the church, school, and neighborhood. It is attended by many alumni as well.

Sacred Heart Catholic School has had the direction and leadership of several pastors and principals dedicated to Catholic education. Changes and improvements have occurred through the years by Monsignor T. Leo Danaher, Monsignor Patrick Madden, Father Anthony Sebra, and our current pastor, Father Victor Narivelil, C.M.I. Father Victor joined the parish in 1997 and served as pastor from 2007 until the summer of 2014. In the Fall of 2014 Sacred Heart was fortunate enough to welcome Fr. James Kaniparampil, CMI as pastor.

The initial Florida Catholic Conference Accreditation was granted in 1972 and has been maintained since that time. The school has been blessed with dedicated principals. Sister Mary Ethna Blackwell was the first principal. During the 60’s and early 70’s, she and Sister Mary Josephine alternated the position. In the late 70’s Sister Josephine began her final tenure as principal. Ms. Marybeth O’Neill became the third principal in 2008 upon retirement of Sr. Josephine. Upon Ms. O’Neill’s departure Sacred Heart welcomed Mr. Jason Acosta as principal from 2013-2017.  In November of 2017, Sacred Heart welcomed sisters back to the campus with Sr. Rosario taking over as principal.

Like most schools, Sacred Heart Catholic School has gone through changes in personnel, facility uses, and enrollment. Sacred Heart Catholic School remains a strong, Catholic community adhering to the highest academic standards and adjusting to the ever changing needs of the families it serves while maintaining a solid foundation which is rooted in Scripture and tradition. The Sacred Heart community appreciates those who have created a legacy of faithful education and depend upon the past to guide them. At the same time, they respect the parents and educators of today who sacrifice of themselves to serve God by building knowledge and values in their children.
​
The school serves Catholic students of Sacred Heart Parish and two adjacent parishes that do not have schools. Students come from families with moderate level incomes, and some have ties to the nearby military community. Non-Catholics are also choosing Sacred Heart School as an affordable alternative to public education. In addition, the school accepts students who receive tuition assistance through the Florida Step-Up Program and to a limited extent, McKay Scholarship.
Sacred Heart Catholic School – Our Mission and Vision
The mission of Sacred Heart Catholic School is to instill a rich Catholic Tradition and the core values of Reverence, Respect, and Responsibility.  Our goal is to become lifelong learners as we prepare today for the challenges of tomorrow.

Inclusion by providing access to our world-class curriculum programs, embracing inclusive participation in our programs, and offering support.
​Stepping on the campus of Sacred Heart, you enter an extraordinary place for children. It is a place where all of our energies are dedicated to helping children become their best selves. We purposefully create an environment to meet their needs from early childhood to emerging adolescence. We are pioneers in providing a leading-edge academic experience, and we are fundamentally committed to helping all of our students become people of strong character. Inclusion is not just a strategy for helping certain children overcome challenges; inclusion is a way of life.